Week four was a great week for MLS fans. It seemed like nearly every game ended with a stoppage time goal to rescue a draw or clinch a victory, and there were plenty of great goals and saves to go around. On a personal level, week four was less great: between a car breakdown, being super busy at my real job and the USA-Mexico friendly happening at 11 PM EST, I come to you for my weekly column a day late and a game short. Sincerest apologies to my loyal readers (both of you).

Stat that told the story for Montreal: Long passes and counter-attacks 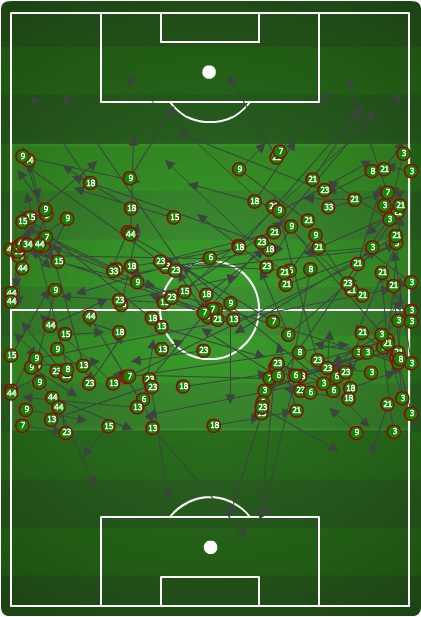 So this isn’t necessarily a stat, but watching Montreal is a clear lesson in direct attacking with long passes. The image above shows all the completed passes by Montreal in the middle third of the field, and you can tell that they tend to be pretty long. And these are only the completed passes – long passes have a higher tendency to be incomplete, so in fact Montreal attempted way more long passes than are in the picture. On the bright side, Montreal has some guys who are pretty darn good at those long passes (and another who’s pretty darn good on the end of them: check out this beauty that Mapp hits to Marco Di Vaio for the Impact’s lone goal. This isn’t new for Montreal: it’s exactly how they played last year when they rolled to a hot start and then struggled mightily down the stretch. The hot start hasn’t exactly happened this year; will the rest of the season play out any better?

What hurts for Philadelphia fans is that if the centerback pairing of Okugo and Wheeler had managed to block a fourth shot, the Union probably would’ve snatched three points instead of just one. From watching Philly a couple times now this year, it seems like their backline, particularly Okugo, blocks a ton of shots. MLS fantasy stats say Okugo is averaging 9.5 CBIs (Clearances, Blocks & Interceptions) per game, and he tallied 9 against Montreal. But only two were blocked shots, and if he had closed Marco Di Vaio down just one step earlier on that goal…. Still, MDV is a class player even at his advanced age, and Okugo has saved enough goals this year that one slip up is hardly enough to pile on the guy.

Stat that told the story for Columbus: Location of Federico Higuain’s touches

If you haven’t watched any Columbus Crew games yet this season, you’re missing out on the most entertaining team in the league. This tweet from Armchair Analyst Matt Doyle sums it up better than I ever could: the Crew is so fluid and so good at creating space in possession that they create a ton of chances. The straw that stirs the drink for all this is their talisman, Federico Higuain. In the past, Higuain has floated all over the attacking half of the field to get on the ball, but this year he’s extended his meanderings to the entire field (see exhibit A: heat map above).

Another part of what’s making Columbus so successful this year is how well the rest of the team plays off his movement. For example, when Higuain slides onto Bernardo Anor‘s flank, sometimes Anor or Dom Oduro or Tony Tchani makes a run off the movement to create an attacking chance. This kind of interplay is awesome to watch, and if Gregg Berhalter can keep his team’s creative spark alive then Columbus could not only make the postseason, but make some noise once there.

Stat that told the story for Seattle: 20 recoveries + interceptions in attacking half

After writing an opus to Columbus’ early play, it’s time to bring them back down to Earth a little bit. If it weren’t for the red card issued to Djimi Traore, the Crew’s perfect start would’ve been seriously in jeopardy. Sigi Schmid came out with a good tactical plan to counteract Berhalter’s attacking possession style, pressing high up the field and trying to win the ball off Columbus’ defenders.

Before going a man down, the pressing led to a number of balls won in the attacking half which led directly to dangerous Seattle counterattacks. Some of this high pressing could also be attributed to the 4-3-3 that the Sounders employed in the absence of Clint Dempsey. I might be alone in this opinion, but I wouldn’t mind seeing Dempsey in that formation alongside Obafemi Martins and one of Lamar Neagle/Kenny Cooper. I know Sounders fans want Dempsey to be the focal point of this team, but he might just be more effective as a complimentary piece in a balanced formation.

Agree with my assessments? Think I’m an idiot? I always appreciate feedback. @MLSAtheist

2 thoughts on “How It Happened: Week Four”