Millionaire Malcolm Forbes was famous for his quote, “He who dies with the most toys wins.” And while that might not be the most moral mantra for life, sports fans have a hard time arguing with the logic. After all, a game is about runs, points or goals, and after enough of those it’s about shiny trophy cases. But in the world of sports analysis there is no such victory in the absolute. Analysts need to explain how those runs, points or goals came about. In the world of soccer especially, there is never a complete answer. Goals are exceedingly rare, so explaining how they grace us with their presence mathematically is difficult, to say the least. We’re happy with higher R-squareds and other such geeky descriptive metrics. Have you ever seen a trophy case filled with strong correlations? Nope, all we get is a little blog post, and if we’re lucky, some twitter praise. Still, we search….

One of the more popular explanations for winning in soccer is Total Shots Ratio, which calculates the percentage of shots taken by a team in games played by that team. A 60% TSR means that a given team took 60% of the total shots fired in the games they played. The logic isn’t all that difficult to wrap your head around. If you can take more shots than your opponent you are likely to score more goals. For the English Premier League, TSR explains 68% of the variance in the point table, which is impressive for one statistic. TSR happens to be less important in MLS. 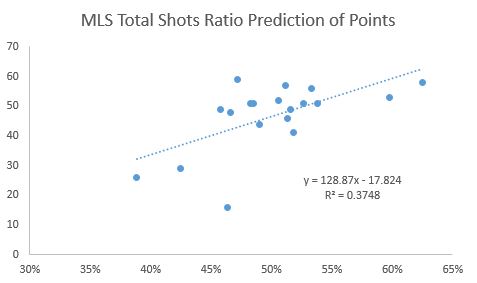 The variance prediction is just 37% and this is likely due to the lower finishing rates in MLS compared to the EPL, rendering shots less effective. But there are probably a number of other reasons why TSR is less predictive of points in MLS. There are a larger percentage of teams employing counterattack strategies which have significant impacts on finishing rates, which would in turn alter the effectiveness of TSR. But what if the shots were weighted to account for the location of the shots? It would be logical to assume that better teams take better shots and make it more difficult on the opposing shooters. But does that logic actually manifest itself when predicting points? ASA’s Expected Goals 1.0 worked pretty well, so a TSR adjusted for shot locations ought to work better than the original TSR.

The first thing required would be a fair weighting of shots by location. To do that I took the ratio of the finishing rate by location and divided by the average finishing rate. Here is the resulting table for adjusting the value of shots. 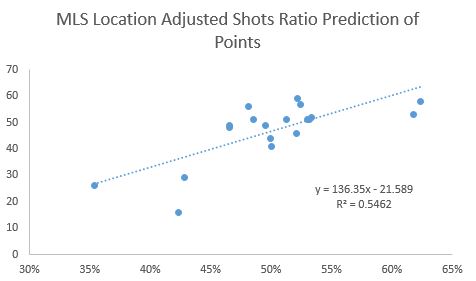 You can tell from just eyeballing the dispersion of the data points that the location adjusted TSR better aligns with points and the Rsquared agrees. There is a 17-percent increase in R-squared. Not just pure volume of shots, but the location of those shots is vital to predicting points in MLS. It would be interesting to see if location is equally important in the EPL, where TSR is already such a strong predictor.

For the curious, the New York Red Bulls were the team that was best at getting better shots than their opponent. Their TSR improved from 47% to 52% when adjusting for shot location. Real Salt Lake actually took the biggest hit. Their TSR was 53% and their location-adjusted TSR dropped to 48%.

It’s only one season’s worth of data, but with such an impressive increase in the ability to explain the variance in point totals, it confirms that location does matter, and that teams are rewarded by taking better shots themselves while pushing their opponents -out farther from goal. And perhaps soccer analysts have another statistical toy to add to the toy box—Location-Adjusted Total Shot Ratio.

On the site and on the podcast we have discussed shot rates an awful lot. A team’s shot rate is simply how many shots it has taken divided by how many shots it has conceded to its opponents. Whenever I make a Game-of the-Week prediction on the podcast, you’ll hear me use two primary pieces of information: which team is at home and which team has recorded the better shot rate. In general, shot rates help to explain not only the relative number of scoring opportunities a team has given itself, but also the relative number of scoring opportunities it is likely to get in the future. It’s predictive.

There are, however, some conspicuous outliers in the league—teams that just don’t seem to follow the rules. Harrison wrote earlier this week about Montreal’s shot data. While Montreal gives up far more shots that it earns for itself, Harrison pointed out that Marco Di Vaio and company also place the ball quite well, finding the lower corners a high percentage of the time.

Perhaps Montreal’s own finishing rate is for real. But I won’t be convinced about the low rate at which teams have finished against Montreal before first delving into some new numbers. We have our own shot location data here at American Soccer Analysis, now, and I’m going to use it. 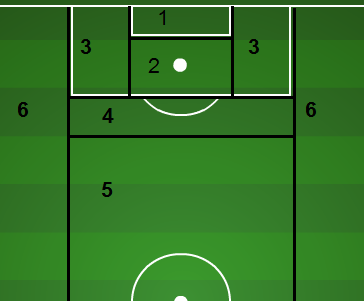 I have broken the field down into six primary scoring zones (seen to the right) in the hopes of accounting for the difficulty of both angle and distance.  It is possible that some teams earn a higher quality of opportunities rather than a higher quantity—or vice versa. In addition to recording where each team gets its own shots, I have also gathered the locations of the shots that each team has given up defensively from each zone. Here are some interesting tidbits about Montreal’s defense.

Despite being ahead much of the time—which would seemingly encourage low-quality attempts—Montreal still gives up a league-average proportion of shots from high-scoring zones one and two. In fact, if Montreal’s opponents had finished their attempts from zones one and two at the league average clip, Montreal would have given up six additional goals this season. However, including all six zones, Montreal would have given up just two additional goals due to some unlucky results from distance.

Because Montreal has played a wide range of opponents, it would make sense that its goal scoring rates against would stabilize to something close to league norms. It turns out, for the most part, that those rates have stabilized. The zones help to control for difficulty of shots, and Montreal’s defense isn’t getting particularly lucky based on the shots it is allowing. The major controversy still lies in the Impact’s offense, and whether or not it can sustain a league-leading finishing rate. According to its shot locations, the Impact “should have” scored eight fewer goals this season.

On the flip side we have Sporting Kansas City. Unlike Montreal, the Wiz have dominated the league all season in shot rates, and yet find themselves third in the East in points per match. Could quality of shots be playing a role?

Possibly. Sporting KC gets more shots from zones two and four than the league average team, and those tend to be decent scoring zones. SKC has outscored its opponents by five goals on the season, but with average finishing rates from each zone, one would expect a goal differential closer to +7 or +8. SKC has underachieved by only about two goals according to the shot locations data. How much of that difference is skill versus luck is still well beyond this blogger, but maybe someday…

*Own goals are taken out of the shot locations data.