Hello friends. This is the first in what will hopefully be a weekly feature here at ASA by yours truly.

First, the background: Not being a fan of any particular MLS team is hard. It’s hard to follow an entire league of 19 teams. Seven or eight games a week are difficult to catch up on, even when they aren’t all played at the same time. Previously, I’ve watched highlights and ‘condensed games’ to try to pick up which teams and players were playing well, but it just doesn’t work. The only way to really learn a team’s strengths, weaknesses and tendencies is by watching every minute of every game they play. There’s no way I can do that with every team in MLS while still working a full-time job. Sorry.

My solution is this: I plan on committing to watching a full 90 minutes of three games per week. This gives me six teams that I’ll feel that I truly know (at least for that week), and should certainly teach me a heckuva lot more than just if I just watched their highlight packages. Since this here is an analytical and statistic-focused blog, I’ll break down each of the three games by one particular stat or Opta chalkboard image that I think told the story of the game for each team. Think this idea is idiotic? Love it? Please, let me know: feedback is always appreciated. But leave my mom out of this.

Stat that told the story for Columbus: 58% of successful passes in attacking half for the fullbacks

The above image is all of the completed passes for Crew fullbacks Waylon Francis and Josh Williams on Saturday. These two players are clearly defenders who aren’t afraid to get forward, but the startling frequency with which they were able to get up the field against DC had to have alarm bells ringing for United fans. For folks who prefer numbers to images, here you are: 49 of the 85 passes that Francis and Williams completed (58%) were in the attacking half. That’s a pretty solid attacking contribution from two guys who are listed along the back line.

This was made possible for Columbus by a couple of adjustments made by new coach Gregg Berhalter. Centerbacks Michael Parkhurst and Giancarlo Gonzalez split reallllly wide when in possession, allowing both fullbacks to get forward. This was made possible by holding midfielder Wil Trapp, who sat very deep to cover the gap between centerbacks. It’s only one game, but it certainly looked like a good strategy in week one for Columbus.

Stat that told the story for DC: 1 attacking player’s pass into the penalty area 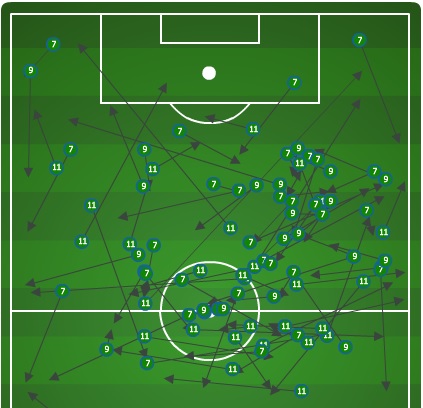 Really, the above image for Columbus tells a lot of the story for DC, as well: they got hammered because the Crew got the ball wide and stretched DC’s shape like a bad hamstring. With a team full of new faces who clearly haven’t learned to play with one another yet, the defense was abused by all the space Crew players were able to find. But I can’t use the same stat for both teams, so here’s what I got for United: one. One successful pass from any of the three players nominally deployed in attack (Eddie Johnson, Fabian Espindola, Luis Silva) that ended in the penalty box.

Seriously: take a look at the Opta Chalkboard above. I get that it’s hard to complete passes in the 18, but for the three guys who are tasked with creating chances, there needs to be more than one completed pass that ends up there. Oh, and that one completed pass? It came from a free kick, and ended with a flick-on by Davy Arnaud that didn’t even turn into a shot. There was a lot wrong with DC in 2013 and a lot wrong with DC last weekend, but if the new faces of Johnson and Espindola were expected to cure all attacking ills….Ben Olsen may be in for a rude awakening.

Stat that told the story for Portland: 20 crosses in the second hour of the game

The Timbers came out for the season opener and were dealt a dose of their own medicine from the new-look Philadelphia Union. Playing in a 4-3-3, the Union clogged the center of the field, put a lot of pressure on Portland and really made it difficult for the home team to get into their possession game. But as any good team does, the Timbers made adjustments. After being credited with just two crosses from open play in the games first 35 minutes, Portland emphasized wide play with Michael Harrington getting forward and Darlington Nagbe flaring out wide. After the 35th minute, Opta credited Portland with 20 crosses from open play. Some of this was due to bombing the ball forward as they sought an equalizer late, but recording 10 times as many crosses was certainly the product of an adjustment made by the Timbers.

Stat that told the story for Philadelphia: 12 midfield interceptions & recoveries to start the game

As I said above, the Union started the game very strong, with their midfield really clogging up Portland’s attempts to possess the ball. The midfield three of Maurice Edu, Brian Carroll and Vincent Nogueira seemed to be replicating some of what made Portland so successful in 2013: clogging the middle of the field and winning a majority of loose balls. Opta credits those three with 12 combined interceptions and recoveries in the game’s first 22 minutes. However, as also noted above, Portland adjusted to the Union’s set-up and began to emphasize wide play. The Union didn’t really adjust to the adjustment, as the Timbers clearly became more and more comfortable as the game went on. After those 12 interceptions/recoveries in the first 22 minutes, Edu, Carroll and Nogueria only recorded seven more the rest of the game. 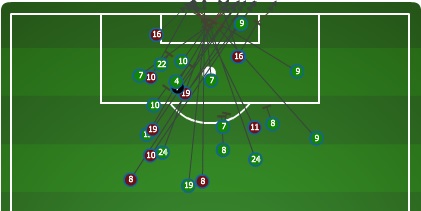 If you’re at this site, chances are you know the concept behind expected goals. If not, scroll down a ways and read up. Anyway, look at the above image: that’s not a map of shots that typically leads to a shutout. According to the numbers run by ASA’s own Harrison Crow, a league average team would’ve finished 2.39 goals from those shots. They finished zero. If you aren’t into the stats and would prefer the English commentator’s version: Robbie Keane missed some sitters, Landon Donovan was unlucky not to finish any of his half-chances, and Juninho and Marcelo Sarvas combined for some speculative efforts that nearly bulged the ol’ onion bag. Oh, and Nick Rimando had a magisterial day in net to keep his clean sheet.

I’m cheating a little here because that’s not a real stat, but any time there’s a 1-0 game, it’s tough to leave out any conversation about the lone goal scorer. In this case, that’s the diminutive Ecuadorian, Joao Plata. Plata debuted for Toronto FC three seasons ago, and it seems like he’s been around for a lot longer than your average 22-year-old. But it’s true. Plata is only 22, and if Saturday night is any indication, he could be in for his best season in MLS yet. Not only was Plata’s finish on the game’s only goal very cool, he was consistently playing with a lot more tactical awareness than I’ve seen out of him in the past. Whether it was setting up Alvaro Saborio for golden chances or making intelligent runs to stretch the defense and open up space for Javier Morales, Plata had a very, very good game against LA.

One thought on “How it Happened: Week One”